Cartoon of the BEC dimer. Bosons hop between two modes; within the same mode, every pair of bosons interacts repulsively.

My long-term interest in “intrinsic localized modes” (ILMs) (also known as “discrete breathers”) [1,2] has recently led to a study of their role in “avalanches” of Bose-Einstein Condensates (BEC) in (tilted) optical lattices in the semi-classical limit [3]. This, in turn, led to a further study of quantum effects beyond the semi-classical limit, using a global phase space (GPS) approach [4]. Currently, we are extending this GPS approach to the case where dissipation is present, with the surprising result that dissipation can actually enhance coherence and entanglement, effectively through the creation of stable ILMs in individual wells of the optical lattice [5].

The energy contours and sample trajectory of a BEC trimer.

Graphene and other 2D electronic materials

The isolation and characterization of graphene as an atomically thin monolayer of pure carbon by Novoselov, Geim, and their collaborators in 2004 produced an avalanche of interest across the condensed matter physics community, from theorists to experimentalists to applied materials scientists and device builders. Working with a number of collaborators, we have studied several different aspects of this exceptional material. For monolayer graphene, we developed a simple model for the phonon spectrum [1] and studied how the monolayer adhered to a patterned substrate [2]. For bilayer graphene, we explored the electronic compressibility [3] and the effects of electron-electron interactions [4]. Very recent studies include modeling the effects on electronic transport of the pseudomagnetic fields produced by non-uniform strain in graphene [5] and exploring a novel non-equilibrium steady state mechanism for inducing an effective gap in graphene [6]. We are currently extending our transport calculations to graphene “bubbles” of arbitrary shape, generated, for example, by applying gas pressure to graphene stretched over a nanocavity.

Graphene, while of enormous recent theoretical and experimental interest, is limited in its application in electronics by its gaplessness. Hence we are extending our research to other two-dimensional materials, and in particular to the semiconducting transition metal dichalcogenides (TMDCs), many of which have direct bandgaps on the order of 1-2 eV in monolayer form. We plan to apply the same approaches to these materials as used in our studies of graphene [5].

For nearly a decade, working with several different collaborators, we have applied variants of the functional renormalization group (FRG) to a wide range of models for novel, strongly correlated electronic systems. Examples have included superconductors in the strong coupling limit [1, 2, 3], the half-filled 1D extended Hubbard model [4], the two-leg Holstein-Hubbard ladder [5], the effects of dynamical phonons (retardation) on the half-filled 1D Holstein-Hubbard model [6], the validity of the Tomonga-Luttinger liquid relations for the 1D Holstein model [7], and the existence of dominant superconducting fluctuations in the 1D extended Hubbard-extended Holstein model [8]. Our most recent work in this area extends the FRG approach to the case of a mixture of two ultracold Fermionic atoms in a two-dimensional square optical lattice and predicts the existence of a novel dxy number density wave state for certain ranges of the parameters in the theory [9]. 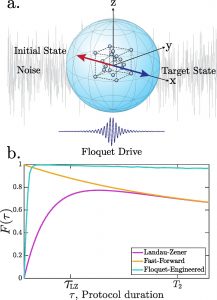