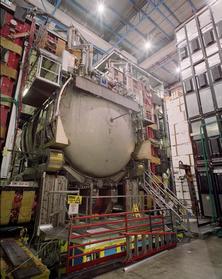 The DØ experiment studies proton-antiproton collisions at the world’s highest energy accelerator, the Fermilab Tevatron. These collisions release energy equivalent to 2000 times the proton mass. The DØ detector is a large, highly sophisticated instrument that measures the fragments of these collisions and allows scientists to study the structure of matter at these high energies. According to our current understanding, the basic constituents of matter are quarks and leptons. All the matter surrounding us is made of the lightest quarks, called up and down, and the lightest leptons, the electron and its neutrino. However there exist two additional families of quarks and leptons with identical properties, except much larger masses. The heaviest of the quarks, the "top" quark, was discovered in 1995 by the DØ and CDF collaborations at Fermilab. The top quark turned out to have an extraordinarily large mass, approximately the same as an entire gold atom. Particle physicists believe that its further study will provide clues to the origins of mass. The members of the Boston University DØ group were actively involved in the discovery of the top quark and the study of the carrier of the weak force, the "W boson". The group is now participating in the second data-taking run which began in 2001 and will continue until 2009. During this run, thousands of top quarks will be created, allowing a detailed study of the properties of this intriguing particle. The data from the Fermilab Tevatron will also provide the best opportunity until the LHC begins operation to find the Higgs boson and new physics beyond the standard model. The Boston University group has taken leadership roles in the construction of the muon detector system and the silicon microstrip tracker, the development of algorithms to identify bottom quarks and muons, and the "Top and Higgs Physics" analysis group. The group has designed and built a significant fraction of the electronics for the muon system trigger, the silicon track trigger, and the central fiber tracker trigger. The group’s physics interests center on the top quark and the search for new particles and forces beyond the standard model.