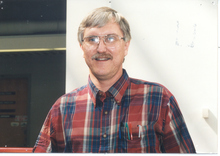 At Boston University, I taught introductory physics courses and served as an Associate Chair for Condensed Matter Physics (1987-1990s), Associate Chair for Undergraduate Physics (1990s-2001), and Faculty Director of the Physics Department (2001-2013). I negotiated who teaches what, and supervised course scheduling. I analyzed departmental trends based on accumulated data, and dealt with special projects regarding space, including grad student room assignments and renovation projects. I also was elected to the Boston University Faculty Council, 1996-2006. During that time, I served on two Dean Searches, and one Presidential Search, and was Chair of the Faculty Council during the eventful period 2001-2003. During 1997-2006, I was also Chair of the University Council Committee on Faculty/University Policies and thus a member of the University Council. Much of this time was required to negotiate a major restructuring of faculty policies as expressed in the Faculty Handbook

In June 2017 my wife Theda Skocpol and I celebrated our 50th wedding anniversary. Throughout her distinguished academic career I have sometimes assisted and generally was aware of her diverse research activities in sociology and political science. Our son Michael was born in 1988 after we both had tenured positions in Boston. He attended BB&N, Brown University, and Stanford Law School, and has since served as a law clerk at all three levels of the Federal Judiciary

I also have a series of personal projects researching Czech-American family and local history. I have written three family books, one of which has also sold over 300 copies at the Wilber (Nebraska) Czech Museum. Another is based on the 1907-8 diary of Blanche Yurka, a New York singer and actress. This diary can be read in annotated form at my BU website listed above.