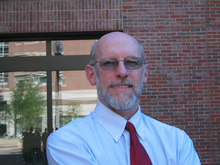 My research is in the area of galactic astrophysics. I use radio-astronomical techniques to study the processes by which massive stars are formed, the interstellar environments in which they form and how they evolve, and their relation to the large-scale structure of the Milky Way. I am active in the MALT90 collaboration, which has used the Australia National Telescope Facility's Mopra telescope to map 90 GHz molecular line emissions from over 3,000 massive star forming regions in the fourth quadrant of the Galactic plane and is now pursuing follow-up analyses of this large dataset. A second activity is the Radio Ammonia Midplane Survey (RAMPS), an ongoing project using the Green Bank telescope to map ammonia inversion spectra and maser emission in the first quadrant of the Galactic plane.