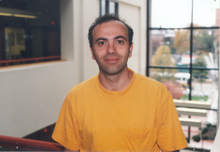 My main goal is to study many-particle systems and to understand the collective behaviors which emerge when a great number of strongly interacting particles move according to simple stochastic rules. This research is driven by applications to irreversible phenomena, such as aggregation and adsorption. To research this, I use stochastic tools to model growing networks, both technological (like the internet) and social. In addition, I apply techniques from non-equilibrium statistical physics to biological networks, to molecular motors and molecular robots, and to the modeling of cancer. I also study collective behaviors of quantum systems.