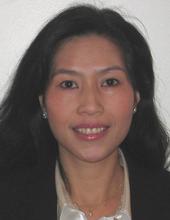 My research interests encompass several areas of soft condensed matter physics, including the dynamics of polymer nanometer films and nanocomposites, dewetting instability of polymer thin films, wetting properties of textured surfaces, and control of particle trajectories in microfluidics. As atomic force microscopy (AFM) is a major tool in my research, I am also engaged in the development and application of various AFM techniques such as AFM mechanics, nanotribology and nanolithography.

It has been broadly observed that the physical properties of polymers, including the elastic modulus, freezing temperature and relaxation behaviors, can become quite different from the bulk when the the material is molded into a nanometer film or structure. Recently, our group developed a method that has enabled us to measure the viscosity of polymer nanometer films with thicknesses from 2 to above 100 nm. In this method, we monitor the dynamics of the height fluctuations of the films and model it with the dynamics of surface capillary waves, which is related to the flow property and hence effective viscosity of the films. Through these measurements, we have made illuminating observations about the rich influences of the interfaces and confinement effect - namely the effect of confining the polymer chains in a dimension smaller than the unperturbed radius of gyration. Having a good understanding of these influences is essential to effective usage of polymers in nanoscale applications.