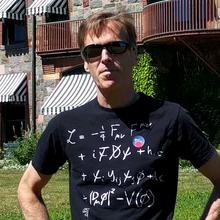 My research is in the field of experimental high-energy physics (HEP). The goal of HEP is to uncover the basic building blocks of nature and the forces between them. In our current understanding of nature, called the “Standard Model”, the building blocks are quarks and leptons, while the forces are mediated by gauge bosons. The focus of my current research is the ATLAS experiment at the CERN Large Hadron Collider. The BU group has used ATLAS data to measure Standard Model processes (W and Z cross sections, WWW final states, production of top quarks) and to search for new physics (new gauge bosons (W’ and Z’), new strongly interacting particles called “technihadrons”, vector like quarks, and dark matter).

“Search for new particles in events with one lepton and missing transverse momentum in pp collisions at √s= 8 TeV with the ATLAS detector”, ATLAS Collaboration, JHEP 09 (2014) 37.

“Observation of a new particle in the search for the Standard Model Higgs boson with the ATLAS detector at the LHC”, ATLAS Collaboration, Phys. Lett. B716 (2012) 1-29.