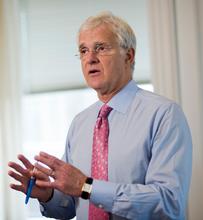 My research covers three distinct but overlapping areas. With my students and other collaborators, I am investigating graphene and other two-dimensional electronic membranes. I have also extended this research to other two-dimensional materials, and in particular to several studies of phosphorene (two-dimensional black phosphorus) and the semiconducting transition metal dichalcogenide MoS2, which has a direct bandgap on the order of 1-2 eV in monolayer form. My long-term interest in “intrinsic localized modes” (ILMs). This has led me to study the possible existence of ILMs in Bose-Einstein Condensates (BECs) trapped in optical lattices, so that the effects of discreteness (from the optical lattice) and nonlinearity (from the BEC) were both present. In addition, I have been working with several different collaborators with the Functional Renormalization Group (FRG), and applying it to a wide range of models for novel, strongly correlated electronic systems.