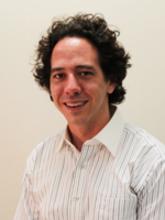 Our research focuses on the nanomechanical properties of a new class of 2D atomically thin materials, such as graphene (single atomic layers of graphite). We are most interested in their remarkable mechanical properties such as high strength, extreme flexibility, and unprecedented barrier properties. We fabricate and characterize nanomechanical devices, our favorite of which is a graphene sealed microcavity formed from a single atomic sheet of graphene suspended over a micron sized etched wells on a silicon wafer. The suspended graphene forms an “atomic drum” which can be vibrated at MHz frequencies using lasers. In addition, we can apply pressure differences and stretch these drum skins. This unique geometry has allowed us to experimentally measure a number of physical properties of 2D materials such as their elastic constants, molecular transport and barrier properties, and adhesive interactions. These atomically thin membranes act as barriers for gases and liquids and represent the thinnest membrane possible (one layer of atoms) with the smallest potential pore sizes attainable (single atomic vacancies), and unprecedented mechanical stability. The applications that we are primarily interested in are semipermeable membranes for gas or liquid separations and nanomechanical sensors.