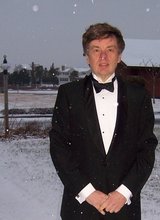 Particle Physics at the Energy Frontier

My research is in particle physics at the energy frontier. My PhD thesis, “Observation of Jets and Tests of Quantum Chromodynamics”, was the first experiment to trigger on and detect quarks scattered from proton collisions at FNAL. The innovative analysis techniques developed for that project laid the foundation for more sophisticated simulation techniques, which would become a standard in the field. After that, I went to CERN to work on the discovery of the W and Z bosons, in which I played an integral and pioneering role, especially in the identification of the first events and measurements of mass and spin. Since 1993, I have worked on the CMS experiment at CERN, where I have helped develop cutting-edge digital electronics for the detector readout, and participated in numerous physics analyses, including the discovery of the Higgs boson

As a graduate student I worked on the first experiment to trigger on hadron jets with a calorimeter, Fermilab E260. My thesis used the model of Field and Feynman to compare our observed jets from hadron collisions to that from electron-positon collisions and made detailed acceptance corrections to arrive at ﬁrst the measurement of quark-quark scattering cross sections. My thesis is published in Nuclear Physics B171 (1980) 1. Thesis committee:  G. C. Fox (advisor), C. Barnes, R. P. Feynman, R. Gomez

At the Cornell Electron Storage Rings, I worked on the discovery of the Upsilon (4S) resonance and using novel event shape variables developed by Steven Wolfram and my thesis advisor, Geoffrey Fox. i performed particle identification of kaons and charmed mesons to establish the quark decay sequence, b --> c.

At CERN  worked on the discovery of the W and Z bosons and measurement of their properties.

Presently, I am working on the Compact Muon Solenoid (CMS) experiment at the CERN Large Hadron Collider (LHC) which is searching for the origin of electroweak symmetry breaking.