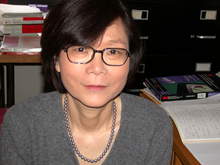 In my current research I am pursuing topics concerning realization of symmetries when they arise in unexpected ways; for example, in models of cosmic inflation. Particularly intriguing is the possibility that Weyl symmetry is present, but the expected Noether charge and current vanish identically. My goal is to understand and clarify this unexpected realization of symmetry.

Many of the questions of current theoretical interest are beyond the energy reach of existing accelerators. However, extremely high energies were once realized in the largest natural particle accelerator, the Big Bang. Shortly after the Big Bang, the universe was composed of a hot plasma of elementary particles. The nature of this plasma, which depends on the properties of the constituent elementary particles, determined the subsequent evolution of the universe. By observing the universe today, we can obtain information about its state shortly after the Big Bang and obtain information about the interactions of these particles at high energy. Several cosmological problems are presently being considered, among them: Is there a consistent inflationary model of the early universe? What is the nature of "dark matter" and what role does it play in the development of large-scale structure? What mechanism produced the baryon excess in the universe?

Topology, the mathematical description of the robustness of form, appears in many branches of physics and provides strong constraints on physical systems. Topologically interesting field theories predict various hypothetical objects and mathematical constructs. Although many of the fascinating objects have not been seen in particle physics, they demonstrate possible phenomena that quantum field theory can support. A significant deformation of the Dirac equation is achieved when the constant mass term is replaced by topologically non-trivial profiles. Examples of interesting profiles are: kink in one dimension, vortex in two and magnetic monopole in three. Dirac equation in the presence of such topological entities possesses an isolated zero-energy solution. The existence of zero-energy solution does not require a speciﬁc form for the inhomogeneous mass proﬁle; all that matters is that it belongs to a non-trivial topological class. It has been shown that they give rise to fermion fractionalization and isolated Majorana fermion bound states depending on the absence or presence of superconductivity in the system. The difference between the two situations results in the presence or absence of a conserved fermion number.