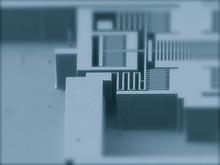 Fluid Dynamics with Ions and Proteins

Fluid dynamics on the micro and nano scale has emerged as a fascinating topic of multidisciplinary research that continues to provide new insights. In particular, fluid dynamics of an aqueous fluid containing ions and proteins is even more fascinating as it occurs in the presence of a number of different phenomena and different physics. Consider, for instance, a high-mass charged protein suspended in an ionic solution containing low-mass positive and negative (salt) ions near the surface of a nanowire channel. The problem is to determine the surface charge profile near the nanowire surface (within 1-3 nm) by detecting conductance or differential conductance change in the nanowire due to the proximity of the protein molecule. This seemingly innocuous problem contains fluid (hydro) dynamics, electrostatics (governed by the Poisson equation, Debye screening and dipolar separation), and electrodynamics (representing the binding and unbinding events, and manipulation of the protein or ions with frequency dependent electric fields). In addition, statistical mechanics plays an important role in governing many aspects of this process. The binding rate is temperature (kT) dependent, which is described by standard statistical mechanics. The protein molecule’s movement is diffusion-limited. Even the microfluidic noise due to moving ions (surrounding the nanowire surface) should be defined by transport equations. However, formal theory for this multi-physics problem is yet to be done. Even simulations are challenging as there are multiple scales in the problem, and finite-element approaches do not work for simultaneous solutions of multiple types of physics with varying scales and boundary conditions. The primary goal of my group is to better define the phenomenology by a series of comprehensive measurements with unprecedented sophistication.

Our research in this specific area focuses on the development of ultra-high-frequency (UHF) oscillators, filters and frequency-selective elements for eventual use as high-speed sensors and communication systems. Our systems are nanomechanical oscillators, and they vibrate at speeds exceeding 2 GHz—the highest mechanical frequency ever reported. Because of their mechanical construct and the small size, they will enable a host of future applications. Currently, we are exploring specific applications, which include nanomechanical memory elements for high-speed high-density data storage and gigahertz-range nanomechanical oscillators for use as frequency-selecting device in cellular phones.

This project involves the development of quantum control techniques to externally control coherence properties of electron wave functions, or to increase the coherence time of electron wave functions in sub-micron and nanoscale mesoscopic systems. The main thrust behind our approach is to develop enabling technologies for increasing the coherence time scales from the usual nanosecond range to microseconds or even milliseconds. The long-term direction is to perform picosecond time-domain reflectometry and a host of quantum control techniques (open-loop, closed-loop learning feedback and bang-bang). 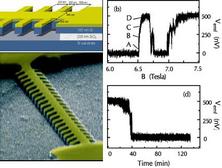 Our current research efforts in this area involve the observation of quantized displacement, energy quantization and Rabi oscillations in macroscopic mechanical oscillators. We have already observed the first two phenomena. In the next few years, we will explore approaches to use these mechanical systems as quantum bits, particularly for quantum information processing. Furthermore, we are exploring foundations of quantum mechanics with these experiments, which involve the largest quantum systems ever realized in a laboratory.

Our current research efforts in this area involve a new proposal for spintronics: spin detection and control can be done mechanical torque. We have recently proposed a comprehensive technique to carry out a series of experiments for demonstrating spin current and spin transfer across a hybrid junction of nanowire, fabricated on top of a two-element suspended torsion oscillator with sub-micron features. The proposed plan of this 3-year project is to demonstrate spin detection and control. This project involves measurement of single-spin conductance and the value of Planck’s constant.