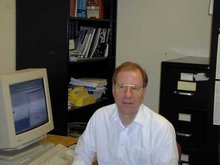 Physics Beyond the Standard Model

My interest for a number of years has been experimentally measuring rare or forbidden processes to probe for physics beyond the Standard Model. Currently my main focus is a large new experiment being developed at Fermilab called Mu2e (pronounced 'mew to ee', short for muon to electron conversion) . Its goal is to see for the first time, or set new limits on the existence of, a muon converting into an electron without any accompanying neutrinos. This is accomplished by first capturing negative muons in atomic orbit around a target nucleus (aluminum in our case)- this is needed so that the muon and electron can bounce off of the nucleus in order to conserve energy and momentum in the reaction. Mu2e is an example of a rare reaction which, if it exists, signals the presence of new physics. The project has initial approval and CD0 approval from the DOE, and we expect to get CD1 approval in summer 2011. I am currently serving as co-spokesman of this project. A few years ago I joined the nEDM experiment to be conducted at the SNS (high flux spallation neutron source) at Oak Ridge, now in development stage. I am in charge of electronics and simulations for this experiment. The goal is to measure the electric dipole moment (EDM) of the neutron to unprecedented precision. Permanent EDM's are a sign of CP violation but have not yet been seen in elementary particles or neutral atoms. New sources of CP violation are needed to help explain the baryon asymmetry of the universe. Our experiment to measure the positive muon lifetime, at the Paul Schirrer Institut innear Zurich, Switzerland, is now complete, with a result on the muon lifetime with an accuracy many times better than previous experiments.