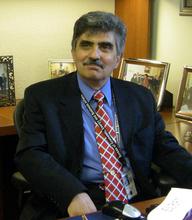 My research is focused on the microscopic and nanoscopic dynamical and magnetic properties of solid surfaces and ultra-thin films. The experimental techniques utilized by my group involve the elastic and inelastic scattering of thermal monochromatic helium atomic beams from clean surfaces and in situ-grown ultra-thin films. In addition to the experimental studies, we have developed large-scale computational and theoretical models to reveal the physics behind observed experimental findings. In addition, we have studied nonlinear properties of surfaces manifested in soliton-like structures and their dynamics in systems such as gold, dynamics of structural phase transitions during the growth of metallic ultra-thin films such as palladium on niobium, quantum localizationdelocalization transition of hydrogen on metallic closed-pack surfaces, surface extraordinary antiferromagnetic transition on NiO surfaces, anomalous antiferromagnetic moments with temperature increase on CoO surfaces, and temperature-dependent structural anomalies on multiferroic surfaces.

Elastic and inelastic scattering of neutral thermal beams of helium atoms or metastable 3S helium atons are used to study the dynamical and magnetic properties of surfaces.

The surface physics group at Boston University has been one of the pioneers in neutral helium atom scattering from solid surfaces in the mid 1980s, and our facility is one of seven worldwide. The technique is the surface equivalent of thermal neutron scattering from bulk crystals, which has provided valuable information about bulk dynamics and structural phase transitions over the past three decades.

Helium atomic scattering was used by our group to study the structural and dynamical evolution during the initial growth of ultra-thin metallic composite films. These investigations have impact on the understanding of basic physical phenomena, especially non-linear physics, as well as potential technological applications. For instance, most cutting-edge technologies involve thin-film growth processes in the synthesis of artificial materials, such as the surface modification processes in the fabrication of electronic and magnetic devices.

Another direction of investigations using helium scattering were recent studies of the dynamics of hydrogen atoms on metallic surfaces have led to the discovery of the surface quantum motion of hydrogen, thus shattering the conventional perception of localized hydrogen atomic bonds.

The surface physics group at Boston University has pioneered, in the 1990, a novel technique that employs spin-polarized metastable helium atoms to investigate, for the first time, the long-range magnetic (or spin) ordering on surfaces of a class of crystalline materials known as antiferromagnets. In this class of materials the net magnetization is zero, but the direction of the spins alternate from one direction at some site to the opposite direction at neighboring sites. Many of the new high Tc materials belong to this class. The studies provide valuable information about how changes in the atomic environment at the surface modify the long-range order of the spin structure. The technique probes whether all the surface electronic spins point in a single direction (ferromagnetic), are randomly oriented (non-magnetic), or exhibit a more complex spin ordering than observed in the crystalline bulk. It also has the capability of providing detailed information about propagating surface magnetic (or spin) waves, such as relations between their frequencies and wavewlength. The effort is backed by large-scale computer simulations used to model dynamical and magnetic properties of surfaces, and thus provide detailed information about the microscopic mechanisms.

One of the interesting results obtained with this technique, revealed the unique behavior that on the crystalline surface of CoO, the degree of magnetic-ordering increases with temperature over the range 250K to 320K!