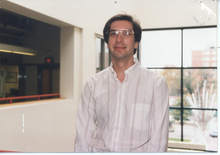 My research examines important problems in understanding the fundamental particles and fields that make up the physics universe. The breakdown of electroweak and flavor symmetries are among the most pressing problems facing particle physics today. Electroweak symmetry breaking is manifested by the non-zero masses of the weak W and Z bosons, and requires the existence of a Higgs boson or some other yet unseen mechanism. Several theoretical approaches to electroweak and flavor symmetry breaking, as well as the related question of CP violation, are actively being investigated. Many of the questions of current theoretical interest are beyond the energy reach of existing accelerators. However, extremely high energies were once realized in the largest natural particle accelerator, the Big Bang. Shortly after the Big Bang, the universe was composed of a hot plasma of elementary particles. The nature of this plasma, which depends on the properties of the constituent elementary particles, determined the subsequent evolution of the universe. By observing the universe today, we can obtain information about its state shortly after the Big Bang and obtain information about the interactions of these particles at high energy. Several cosmological problems are presently being considered, among them: Is there a consistent inflationary model of the early universe? What is the nature of dark matter and what role does it play in the development of large-scale structure? What mechanism produced the baryon excess in the universe?