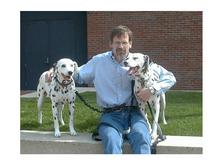 Interactions of Particles and Matter.

My primary focus is on the interactions of particles with matter. I have developed and built magnetic spectrometers for cosmic ray physics above the atmosphere, and he designed and built precision muon tracking detectors for ATLAS, which played an important role in the discovery of the Higgs boson. In addition, I have recently joined the Dark Energy Spectroscopic Instrument collaboration (DESI), where I am working on the construction of the focal plane instrument. Among other things, this will enable the measurement of the expansion rate of the universe over the past 10 billion years, with the goal of distinguishing various models of dark energy. I am currently directing two BU graduate students on DESI, who are working on simulations and analysis of data involving the Lyman alpha forest, and on protoDESI, a prototype detector that will be mounted on the Mayall telescope in the summer of 2016.

“Observation of a new particle in the search for the Standard Model Higgs boson with the ATLAS detector at the LHC,” ATLAS Collaboration, Physics Letters B 716, 1 (2012).