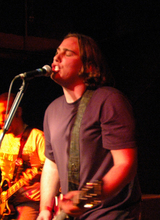 Alum Billy Hubbard studies nanomaterials at BU, and one day, he just might pop up on your iPod Nano.

Over the past year, Billy has developed methods for producing and attaching electrical contacts to graphene, a single atom-thick hexagonal lattice of carbon atoms. He begins with a block of graphite, and ends with simple graphene-based electronic devices. Along with the rest of his research group in the Optical Characterization and Nanophotonics Laboratory, of Prof. Bennett Goldberg, he uses these devices to test various properties of graphene, including optical and transport properties.

Graphene is a hot topic in physics, with more abstracts at the March Meeting of APS this year than any other single subject, an astonishing 7% out of 5,000. The great interest is due to novel physics as well as potential applications in nanoscale electronics and optoelectronics. Billy anticipates discovering some fascinating things about graphene from their experiments, such as how the material’s properties change at low temperatures and in the presence of a large magnetic field. The methods developed are also applicable to other nanomaterials, such as carbon nanotubes, which is something he plans to study soon.

Outside the lab, Billy is very passionate about music and tries not to let his books and pencils keep him from it for too long. He sings and plays guitar, and also writes a great deal of music, often scratching down one-liners in the back of his notebook.

Billy grew up outside of Boston and is still playing with the band he started in high school: Forest Henderson. Playing shows is probably the most fun one can have outside of Disney World, Billy says. And now that Forest Henderson is building some clout as a band, it has a foot in the door at nearly every local club in the city.

An officially licensed MBTA musical performer, Billy is known to hop on the subway with a guitar, pick a train station and start playing whenever he has a chance. It’s great practice, he meets the most interesting people, and he makes a few bucks as well. He says he’s kind of a “big deal” on the Blue Line.